It has been a long time since I've written a post here, but my journey has continued and it is hard for me to believe that I am going on 5 years since it started. When it began, it was a journey rooted in spirit from a place in my heart that needed to search and now is largely about reclaiming a culture that was almost lost to me and my family. Along the way I have been provided many teachers, mostly in the form of elders, who have given of themselves freely and never hesitated to share their knowledge.

Early on, I became acquainted with the distinct smells of burning white sage, sweet grass and less frequently cedar and tobacco. All of these are sacred in native communities and they are called "medicines." The concept of medicine in native culture (at least the ones with which I am familiar) is very different than our modern society. It is not specifically about the healing of the body. They are related to the spirit. They are used primarily in ceremony and prayer. Each has special uses and characteristics that make them unique. They are also associated with specific directions in the native medicine wheel. 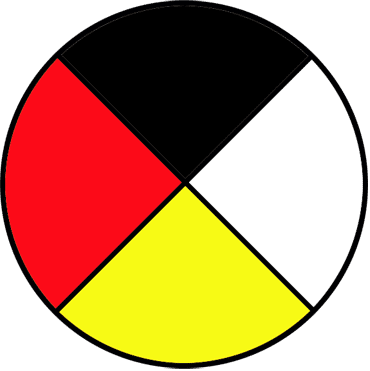 There are entire books used to explain the medicine wheel, and I am certainly no expert in this area. Essentially, it reminds us of balance in spirit, body, mind and emotion. This sacred symbol almost always contains the colors, white, black, yellow and red, representing the four sacred directions and the colors of all humankind. Each quadrant is associated with characteristics and teachings. There is no right or wrong way for these colors to be shown, but some combinations have associations with specific nations and others come from spirit and are particular to that person who shows them. The colors, direction and medicines I use and refer to here have been taught to me by Mi’kmaq people in my acquaintance. There are variations even among these in the Mi’kmaq nation. As always, I share what I am taught.

Tobacco, is today associated with the direction of the north . It is largely used as an offering before prayer. It is not native to the Mi'kmaq areas, but they used to grow a substance called "Indian Tobacco" that was included in a mixture of herbs to be smoked in the scared pipe in ceremony. When offered, it is common to make a prayer tie in which tobacco is placed in red felt and offered to the creator or a person for something you are asking. I keep some tied in a pouch to the back of my drum for my offerings along with ties I have been given. Each of the ties on my drum has meaning and significance to me personally.

I have been blessed with teachers and also friends. One friend I made here in Massachusetts is Mi'kmaq and came from Nova Scotia. Her family resides about a half hour from mine and when I was home this summer, she invited me to pick sweet grass with her friend and sister.  I was thrilled as I had no idea how to do it and it turns out that there is a method and many traditions surrounding it's harvesting. I learned a lot that day about traditions that have happened for generations in Mi'kmaq communities just a few miles from where I grew up. I even had the extra blessing of seeing a beautiful mother eagle and her baby close up as we walked along the shore to pick. New friendships were formed that day and I hope I will see them again this summer. It was a fantastic day with a great group of ladies.

Another important medicine is sage. Sage is associated with the direction of the south. It is used to "smudge" before native ceremony and is used to purify the spirit, items and area of the ceremony. The preferred type of sage that is burned is white sage. It produces a thick smoke and very distinct smell that attracts positive spirits and repels negative spirits and energies. If you ever attend a powwow, you will see every one who enters the circle to dance will be smudged with white sage before entering the circle. When we smudge, we remove from our minds all negative thoughts and energy at the time we are smudged.

The last medicine is cedar. It is a medicine associated with healing and the direction of the west. It is also not native to the east, so juniper, a relative plant would have been used in Mi'kmaq territory. It is also used in smudging ceremonies. It may be used to line the floor of the sweat lodge as well.

There is a misconception among non native communities that natives smoke tobacco frequently in ceremony. I have found these pipe ceremonies, in which tobacco is smoked, are sacred and more rare. Often the smells of sage and sweet grass are more familiar.  Along this journey, these medicines have come to me, sometimes as gifts, and other times in the forms of offerings for singing. Many came before I even knew their significance. I keep them in a special place at home and now use them for my own prayers and to pass on to others.