At the center that I attend each week, the drum holds a place of honor. It is draped in a blanket with beaters close by. It has an area specifically designated for it and we gather around it each week to sing songs of healing, mourning, and honor, to name a few. All have significance. 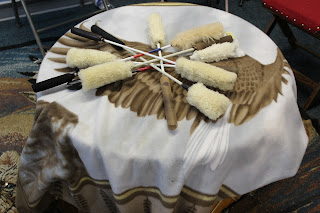 When a drum comes to a group, it comes in a ceremony and is officially named. It often has a "keeper" who looks after it and takes it from place to place if it is moved for an event such as a powwow. We make offerings to the drum of tobacco before we sing. It is powerful and respected. Before events that we attend or powwows coming up, the drums are always announced. They hold a place of honor and anticipation for the music that we will hear. In most cases, we will know the drummers, the songs and the people and friends who sing with them.

The drum has great power because of it's connection to mother earth. It is the heartbeat of mother earth. The creator gives everything life, but mother earth sustains it. The drummers are the warriors and are male. Adult females, like myself, do not drum on the large drum because of our close connection to mother earth and this feminine power. We stand in the outer circle as a circle of protection around the warriors and we sing and keep time with our rattles.  We approach the drum only for offerings and in skirts out of respect for this feminine power. These are traditions I have learned and respect.

As someone learning these traditions, these concepts were completely foreign to me. The place that the drum holds and the place of music in this culture is very different from anything I have known. I have grown up in a culture that loves music, but if I am honest, it is for entertainment mostly and we are self-conscious about it. If one doesn't have a nice voice or play something perfectly they are embarrassed to be heard. Perhaps closer to it is singing hymns at church or singing the national anthem, but even these are not the same. There are very few moments that I have experienced that come close to  being a part of the singing and drumming in this culture. The experience here is something much more vital and communal. I would call it something closer to prayer. When people are in need of help, we sing. When they are sick, we sing. When we wish to honor someone, we sing. When someone has passed, we sing. When we wish to celebrate, we sing. Connecting all of it is the drum and no voices are held back.

Last month, I had the opportunity to make my own hand drum. The experience was exciting for me and I couldn't help but notice as I touched and worked with the wet deer skin, how alive it felt. I was aware of it each time I touched it. One friend who had made many of her own drums gave me the advice to "own it" and work it to the way I needed it to go. It was my drum after all and I had to make it my own. All the time there was the awareness that this skin once belonged to something alive, something else made by the creator and given to me for the songs I would sing. I was grateful and have used it daily in the days since.

These hand drums are played by both men and women and are sometimes painted if the owner feels the spiritual need to paint it. Knowing I would be making my own, I was at a loss for what I should paint on something so meaningful as my first drum. I had almost decided I  was not going to paint it until Roland, my teacher, came up  to me and said, "Why not paint your children's hands on it?" As they are the most important force in my life I thought it was perfect. In children, I also see hope for the future and I am hopeful that these traditions will carry on to the next generation in my family. So, that's exactly what I did. I included some double curves and a "V" symbol (Mi'kmaq) that represents Cape Breton, the home of my Mi'kmaq ancestors. I chose to use the four sacred colors of black, white, yellow and red, which hold so much meaning to all native people.

As my journey continues, I am looking forward to singing my first lead line in a song in January (in public that is). So far it has only been in the safety of our group and usually not alone. Roland let the women know that they would be singing the bear song with our hand drums at an upcoming event. It is funny to me that after all the singing I have done in my life, this makes me so nervous.  Perhaps it is because of its meaning. I think I am in good company as other women seem to be a bit nervous as well. Roland's announcement created a great conversation about how the drummers communicate to know who is doing the lead and when. Some of the signals I had seen, but no one had ever explained them. I like the idea of the women singing songs together. I hope we can do more of it. I am grateful to all of them, women and men, for teaching me so much.