This is not the first event that I have attended with UNACC, but this one held special meaning for me. This is the first time I wore my own hand made regalia, sang and danced at an event. For some of you, this may not seem such a feat, but to me it is. When I was just beginning this journey a few years ago, I had the opportunity to meet with an elder who told me I would have to start thinking about my own regalia. At the time I felt she was testing me, and I did not say much as a response. I remember thinking that this was not something I was likely to do. These thoughts occurred because at that point I had an incredible feeling of isolation and no connection to a community.

I am happy to say this has changed largely due to the new friends I have made. It was not long after I started attending Mi'kmaq classes and weekly meetings at UNACC that many of the women began asking me about my regalia. I think they sensed that I was learning and to their credit they helped me along. It was not long before they were helping me to make a dance shawl, showing me beading, talking to me about the advantages to hide or cloth clothing, and I was on my way. One woman brought me cloth for the shawl, one showed me how to fringe it and another showed me beading for my moccasins and leggings. I have worked on this first outfit all summer and this week-end I wore it.


In addition to the lessons I was learning about regalia, Roland and the drummers have kept me singing and learning traditions. I learned about making a tobacco offering before I sing each week and I am memorizing my songs daily. So, this week-end, I went happily to the event excited that this time I could sing and wear my regalia. I should also mention that I have made some friends on face book. Some of these people are singers and dancers who come from the Eskazoni reserve and they have encouraged me to sing and learn the songs but to do it first and foremost from my heart. This is where it all comes from for me, so that's no problem. 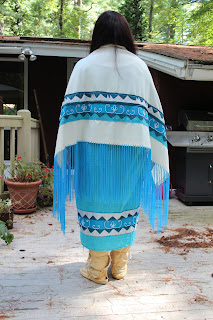 Here in the east, you see regalia that is a bit more subdued than in other parts of the country. No less beautiful, but the traditions are different. Often, when people think of traditional regalia, it is the Plains nations that come to mind. Take the large feathered war bonnets as an example. You will not usually see these in the east although they are worn by some chiefs at ceremonies. They are not traditional to this area. The Mi'kmaq traditions range from painted or beaded buckskin (pre-European contact) to ribbon applique skirts, piqued caps and beautiful bead and quill work on red, dark blue or black felt. I have been pouring over books doing research and they are simply beautiful.

My regalia is not incredibly elaborate. I have kept my first one simple and I do plan to make more. I will say that it is definitely special because I made it myself. No small feat for a girl who has not done much more sewing than was taught in an eighth grade home economics class. I included some traditional Mi'kmaq beading patterns on the leggings, dress and shawl to give it more meaning.  I chose to add a traditional curve motif. It is believed that this motif had great spiritual meaning, but it has been lost to time. The motif appears in petroglyphs and on other items that have been preserved and it is a main feature of bead work throughout the 18th and 19th century. The other patterns on my dress and shawl are taken from 19th century ribbon work dresses.

I do not have a spirit animal as of yet, so I have not included any of these powerful symbols, which are common on regalia. It is my understanding that this is something an elder can bring to you or it can reveal itself at a sweat lodge, in a dream or another meaningful way. I am the equivalent to a toddler in this journey, so I will wait until it reveals itself to me. I chose shades of turquoise because this color has always had special meaning to me and I have always been drawn to it for some unknown reason. 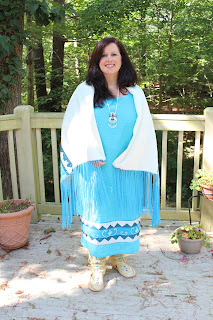 So, now that I have one outfit, I need to make a few more  to keep up with the events I hope to attend! Thanks to the wonderful women at UNACC, I have also begun making shawls as gifts to women close to me or that have influenced my life in some important way. These shawls are given to honor someone and I have to admit to finding great joy in making them. I am currently working on one for my grandmother, who I am happy to say is anxious to wear it.