Last week, I received a large box of books about the Mi'kmaq people from my father. My father is a collector and has been picking up these books on his travels for years. He probably never imagined that I would be using them in this manner. I was thrilled because information is hard for me to find in Massachusetts. There is no shortage of Native American information, but not specific to the Mi'kmaq. I am anxiously awaiting my annual trip to Nova Scotia when I can do some exploring and obtain some new resources.
The first thing I would like to do is to gain some information on the origins of my ancestors and how they came to be in Cape Breton. I don't feel the need to reinvent the wheel when it comes to research, so I am looking to Daniel Paul's book, We Were Not the Savages,  as well as a book called LeJeune and Youngs, An Acadian Mi'kmaq family by Lark Blackburn Szick, for answers. The latter being in the shipment of books sent to me by my father. The information presented here comes from these two books. 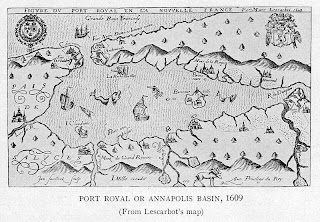 In 1604, the French came to the maritime provinces to attempt to set up a colony. The first attempt at settlement was a failure with many dying of disease and the cold weather on a small island called St. Croix. The settlement was relocated to the current Port Royal location in Nova Scotia after the first winter, but was abandoned in 1607. The French returned in 1610 with the idea of trying once more. The settlement survived with Mi'kmaq assistance and soon Jesuit missionaries arrived at Port Royal. The Jesuits kept records of births, deaths, christenings and marriages that took place. There were documented marriages between these early traders and Mi'kmaq women.
Both the French and the English were in Acadia to acquire power and wealth through the fur trade and by extending their presence in the new world. The Mi'kmaq had formed a special attachment to the French. (My own Mi'kmaq ancestors would list themselves as being French on census records 100 years later.) Daniel Paul says the following regarding the relationship between the two nations:
"the Mi'kmaq were willing partners of the French. The French respected them as human beings, ate their food and were quite willing to learn of Mi'kmaq cultures and adapt to their ways while enjoying the people's hospitality. Most importantly, although they also thought their own culture to be superior, the French did not exhibit an overwhelming desire  to make the people conform to French cultural values. And they extended to them many courtesies. For example, if a Mi'kmaq family or individual moved to France, they were accorded all the benefits of citizenship , and full French citizenship if they desired. No genocidal actions were taken. Consequently, French settlement in Nova Scotia did not encounter organized Mi'kmaq resistance." (page 50, We Were Not the Savages)
As friends of the French, the Mi'kmaq naturally become enemies of England. They were certainly a concern for the British. Daniel Paul comments, "the Mi'kmaq, having a relatively large population to draw upon, presented an imposing force of Warriors who had to be reckoned with. This simple fact would have motivated the English and French to court Mi'kmaq neutrality or alliance." (page 55)
I am a descendant of the Young (Lejeune -Briard) family in Bras D'or and it appears that our Mi'kmaq history is intertwined with these French fur traders and Jesuit priests who arrived in Nova Scotia in the 17th century. We know that one of our distant ancestors was named Pierre Lejeune dit Briard and arrived at Port Royal from France in 1632. He married a Mi'kmaq woman. In addition, I know that many of my ancestors came from the villages of Cap-de-Sable and LaHave. These were both Indian villages in Nova Scotia.
According to
Lark Blackburn Szick, Germaine Lejeune (my G6 grandfather), came to Bras D'or around 1750 from Petite Riviere in LaHave. The exact reason why, I will explore later. This history must be confusing to research, because it is confusing to read.  It is not unusual to find many family members with the same name in one generation and also in previous generations. The communities are very small and there are close relationships between families, often with cousins marrying cousins. It appears that we are descended from many lines because of these close relationships. More than once, I discovered myself tracing back the wrong person while reading.
In summary, after piecing together these bits from my history, I have learned from these readings that the Lejeunes came as Fur traders and missionaries to Port Royal. They married Mi'kmaq women and their descendants continued to live within the villages of Cape Sable, Le Have and Port Royal and married other Mi'kmaq in these villages. They had a strong alliance with the French and therefore became enemies of the British by association, no doubt paving the way for their exodus to Cape Breton.
Posted by Heather at 1:11 AM