Last year when I was home visiting the Glooscap Center in Millbrook, the exact day of my realization that I had a connection to the Mi'kmaq people, I was very interested to learn that there was an archaeological dig happening in Debert Nova Scotia. This dig is currently uncovering the remains of Mi'kmaq settlements that were over 11 000 years old. So, since I was not far from the area, I thought this would be a fun place to visit. 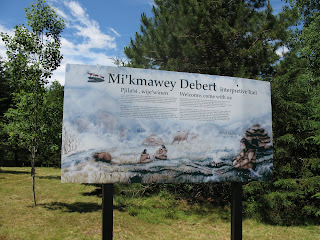 We found the site. It had a big sign where it asked you to imagine going back in time 11 000 years, just after the last ice age, when giant beavers weighing 450 pounds, caribou, elk , moose, foxes and possibly woolly mammoths roamed the area. According to the Mi'kmaq Debert website, the "land was mostly covered with grass, small stands of spruce, birches and willows." Exciting. I was ready to see it all. Thankfully, there are no longer 450 pound beavers roaming Nova Scotia ,although it would not be strange to find the usual kind along the way. It was exciting to think that the path I was about to follow would have been frequented by Mi'kmaq ancestors thousands of years ago. So, off we went and followed a lovely cut path into the forest. 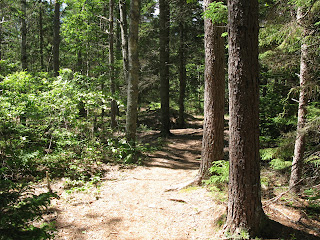 We began to walk and noticed lots of rare lady slipper plants along the way, a bit past their prime, but special none the less. The trail had been nicely cut out with various small stops along the way where you could rest. I understand that the whole trail is over 4km long. We walked for quite a bit but did not encounter any dig spots. It then occurred to us that these sites may not be open to the public and that the trail we were on might be it, lovely as it was.

I must admit that I was a bit disappointed that I did not see a dig, but the walk was incredibly beautiful so I was thankful for that. As we made our way out of the forest my father struck up a conversation with a young woman who turned out to be an archaeologist involved with the project! She was a native of Newfoundland and was also of Mi'kmaq descent. She was able to shed some light on what was going on and we learned that there are plans in the works to set up a Mi'kmaq cultural center in the next few years. (Yes, I will be back to check it out.) I told her about this blog and that I would more than likely talk about her here.

The following was taken from the Mi'kmaq Debert website and from information learned in our conversation. This dig is considered to be one of the most significant archaeological sites in North America and they have unearthed over 7000 artifacts to date.

The current site at Debert was uncovered in 1948 by E. S. Eaton. There was a military camp in the area during WWII and it was a major area for materials that were leaving Halifax for Britain. The site was discovered as a result of the activity and disruption of the soil at that time. The site was excavated in 1960 under the direction of the Museum of Canada, the Nova Scotia Museum and the Robert S. Peabody Foundation out of Andover, MA. Over 4500 artifacts were uncovered at that time and are currently being held at the Museum of Civilization in Ottawa. 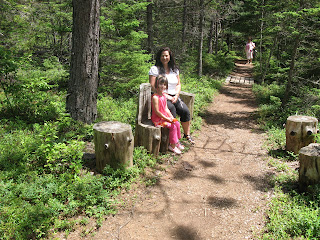 The current site was declared an historic site and a protected place in the 1970s and in the 1990's additional sites were found nearby. Protecting the site is paramount and the Confederacy of Mainland Mi'kmaq are developing the site on behalf of all Mi'kmaq communities in Nova Scotia. There is an Elders Council which is helping to oversee the project since 2002. They are currently planning a facility and cultural center to house the artifacts and tell the story of this historic place. Their hope is to make it a "place for instilling pride and identity." Sounds good to me.
Posted by Heather at 10:57 PM