A few weeks ago, I had the pleasure to attend a seminar hosted in part by the MCNAA. The speaker was Claudia Fox Tree, who is from the Arawak nation. Ms. Fox Tree identifies herself as a multicultural Native American and is half Arawak and half German. She is a teacher and lectures at Universities. She holds an M.Ed and is on the Board of MCNAA. She also is the Massachusetts Liaison to the National Confederation of Taino People headquartered in New York. She has a wonderful site where you can view her complete profile and a lot of great resources on Native American culture: http://www.nativeamericanresources.blogspot.com

This seminar was primarily intended to educate the white community about Native Americans. Being new to my own nation, this was a perfect opportunity for me to gain some knowledge. She began her talk with singing, including us all in the song while she beat time with her hand drum. She even made small rattles so each of us were an integral part of the music. The music teacher in me loved this, and it was a great way to break the ice. 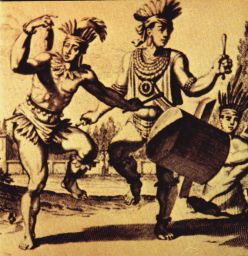 Ms. Fox Tree told us about her own Arawak nation. The Arawak people come from different areas in the Caribbean. Her people are the Taino people. The Arawak people were the first people that Christopher Columbus met when he discovered America. They were gentle and welcoming and did not have any idea that within a matter of hours, Columbus would already be calculating and plotting their demise. His actions paved the way for the enslavement of thousands and the slaughter of many millions of people. It would eventually prove to be the end of some 500+ Native American nations.


"We shall take you and your wives, and your children, and shall make slaves of them, and we shall take away your goods, and shall do you all the mischief and damage that we can, and we protest that the deaths and losses which shall accrue from this are your fault ." - Christopher Columbus


The stories that I have been reading of the actual events and diary entries by Christopher Columbus are shocking to say the least. Horrifying may be a better word. It is a wonder to me that this part of history has not really been revealed to us in North American society. Perhaps some have heard it and choose to ignore. We definitely hear a storybook version of the three ships and Columbus sailing the ocean blue in 1492. When I was training as a music teacher, I remember teaching elementary school students songs about Christopher Columbus for Columbus Day. I did not know this history. It certainly casts a new light on the protests I have been hearing about. I cannot comprehend why we have a national holiday in the United States of America in remembrance of mass genocide and enslavement. How can this possibly be justified?

Ms. Fox Tree spoke to other ideas and stereotypes that persist in American culture. She mentioned the fact that so many sports teams across the country still use racist images and team names. Some of these are used in the towns in and around where I am   living now. She also provided many stereotypical words that are associated with Native Americans and common misconceptions about them. A few that stand out are:

Chief: This word actually comes from European society. The Native American notion of a chief was not that of a dictator or King. The "chief" in Native American society often served as a kind of advisor who had the best interest of his people at heart.

Indian giver: Today, this term means that someone takes back what they have given. It was the custom in many Native American cultures to offer a gift. If the gift was accepted, the person receiving the gift would give one in return. If a return gift was not given, the person was well within their rights to take their gift back, as this was custom.

Reservation:  A plot of land reserved for Native Americans. Many first nations do not hold the idea that the land can be owned by anyone. The fact that a foreign culture moves in and forces people on to a reserved section of land is absurd.

Powwow: This is not a talk between a few people. Powwows were once sacred ceremonies but have evolved into social gatherings today.

There were so many more that she offered, but I cannot mention them all. Please take a look at her blog. I am  constantly surprised at how many of these stereotypes I encounter on a daily basis now that I am aware of them. I don't think I would have really noticed these things before.

At the end of the seminar I went to speak with Ms. Fox Tree. I was very anxious to ask her if she knew anyone in the Mi'kmaq nation who could teach me about music. She was very kind, even when I made the mistake of asking her about a completely different nation than the one to which she belonged. (Note to self: Not all Native American nations are the same.) She graciously told me that she hosts a drum circle and I would be welcome if I wanted to learn something from her perspective. I left her my email address and I hope that I will have this opportunity.

As I write on this April fools day, late at night, I also want to mention one last realization that I took from that day. Ms. Fox Tree mentioned that the whole notion of April Fool's Day had a Native American connection. Like many other societies around the world, the new year used to begin around the time of the Spring equinox, when the earth is pregnant with new life. (Makes more sense than January doesn't it? ) This was celebrated with festivals lasting many days. In the 1500's, the calendar was changed and the new year was reset to January 1st. Those who adopted the new system would mock the others who were still celebrating the old ways on or around April first. The yearly cycles of Native Americans were tied to the world around them, not the whims of Kings or religious leaders. Something to think about.

I am also linking a video that  I found on You Tube entitled the "American Holocaust."Something else to think about.